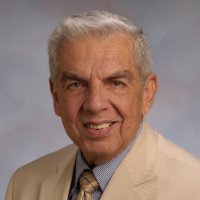 A native of Arecibo, Puerto Rico, Luis Enrique Velázquez came to Knoxville to work as a Civil Engineer with the Department of Energy. As a Latino, he was interested in community building and immediately began to plan activities that would bring together the Latino community. The Department of Energy gave him a second responsibility as a minority recruiter and sponsored trips to Puerto Rico and to universities educating Latinos and now many of the Latinos employed by DOE are there through his efforts in recruitment.

After 25 years of service, he retired from DOE but could not sit still. A project sponsored by Knoxville Legal Aid gave him the opportunity to create a directory of Latino owned businesses throughout East Tennessee. A meeting of these business owners at the end of the project gave birth to the Hispanic Chamber of Commerce of East Tennessee. He then became its first Director and CEO, a position he held for 10 years and only left when he was stricken by terminal cancer.

Luis graduated from Leadership Knoxville in 2006. His active role in the community gave him the opportunity to serve in many Boards and Committees. His belief that education was the key for the improvement of our community was recognized by the University of Tennessee who made him a Chancellor’s Associate. The scholarship on his name sponsored by Hola Hora Latina is an appropriate recognition and his family is very grateful and proud.

The next cycle of applications will be due on March 1, 2023. Please use the adjacent Scholarship Application link to access the necessary forms and email to Maria B. Clark, mbirgit@gmail.com.

Criteria: Students eligible for the scholarship must be graduating High School seniors who reside in any of the following counties: Anderson, Blount, Grainger, Jefferson, Knox, Loudon, Sevier and meet the following criteria:

1. Latino descent (a person who traces origin to a country formerly colonized by Spain or Portugal). *Please clarify briefly if you were born in or are a first or second generation descendent of a person from Mexico, the Caribbean, Central- or South America.

2. Need of financial support as defined by FAFSA

Application: Submission of the scholarship application package before the March 1, 2023 deadline. The deadline is the postmarked date after which applications will no longer be accepted.

Notification: All applicants will be notified of their status by Monday, April 14, 2023. Please direct any questions to Maria B. Clark, mbirgit@gmail.com